Another raw cold day this Sunday with a forecast wind of low teens from the north west.  There was a nice wind when people arrived, but it slowly faded away for the start at 11:10.  The light weather specialists soon opened out a lead, but it took over 31 minutes for the lead boat to complete one lap, so they were finished there.  Fortunately for the slower boats, the wind steadily filled in for the slower boats to give them a chance to win on handicap.  Young Oli Willmott took his first ever win over the Comet Trio of the Harlands.

There were fewer takers for race 2, but there was a steady wind from the north east.  Several of the boats came to grief along the south bank by hitting obstructions below the surface.  The water level is the lowest level all year now, and the south shore must be avoided at all costs.

All members are welcome to join us in the annual end of season Christmas Pudding Race.  Mulled Wine and Mince Pies will be served once the race is over.  See poster for details. 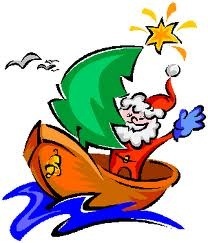 It was a bright sunny day that was forecast for wind speeds in the mid teens from the east.  The wind was delayed in arriving, and never reached the predicted speeds, so there was some searching for the shifty wind up the beat.  The low level of the water did not make things easier, with a large wind shadow at the dam end.

There were several youngsters to add to the usual suspects for the day, one coming all the way from Crewkerne in south Somerset.

Here thanks to Dan Wright are a few pictures of today’s sailing.

Why not come and join us next Sunday. 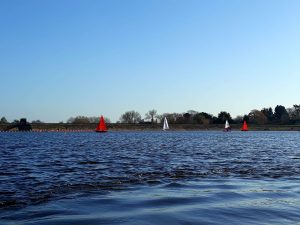 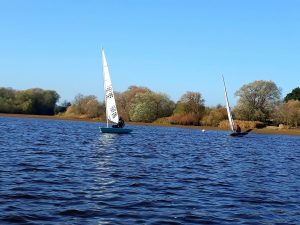 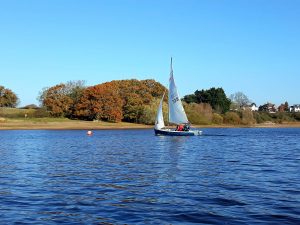 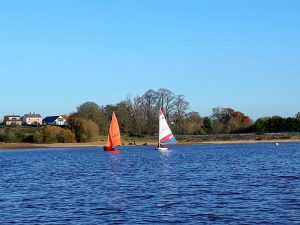 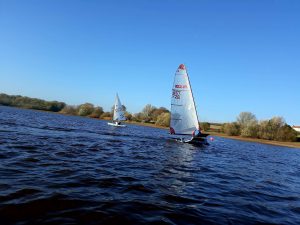 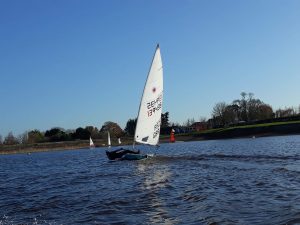 The uptake for the winter series has not been that great so far, it would be good to see more members participating.

If you want to get some exercise and fresh air in your lungs or just a cup of tea and a chat come and join us next Sunday.

Five boats competed on a sunny Remembrance Day race in sun and a fresh south westerly breeze.  Dan Langdon was forced to retire near the end of the first lap when his kicking strap broke.  The remaining four boats were grateful to last to the end of the full race, but only two were looking for a second race.  As three starters are required for a race, boats were packed away for the day.

The first day of the 2018 Winter Series produced less wind than forecast from the south east, and the rain stayed light mizzle until later during the second race.  Four dedicated boats made a delayed start and sailed two races back-to-back.

The Sailing Committee have been discussing how to make the starting of races more fair when there are strong winds and capsized boats.

The Starting Area has now been defined and the Race Officer should delay the warning signal for a race start until there are 3 boats sailing within it.

The Committee will continue to monitor the question whether two boats should be required to start to constitute a race (currently a race is valid with just one boat starting), and make changes in future if necessary.

Winter series Notice of Race is on the Noticeboard and published here.

The fresh north easterly breeze, along with the cold temperatures of the weekend, made the possible sailors think twice about taking part in the final Sunday of the Autumn Series.  The water level continues to go down, and it may be some time before levels rise again without some heavy rainfall.

Congratulations to Martin and Lynn Harland who comprehensively take the win in the morning and afternoon series.

The Sunday racing results and reports are back, now that Tom has returned from holidays.  Go to the Racing Results page for the placings as we go into the final week of the Autumn series.

This week It was a beautiful sunny autumn day that started with no wind.  The start of the AM race was delayed until 11:30, when the wind filled rapidly from the west to a moderate to fresh breeze.  An RS Quest was sailed, as a trial by Mike Hayes and Steve Chidgey, but the PY was unknown at the time.  It has been determined to have a PY of 1300, which placed it third overall.  The PM race wind headed into the north west and became fresh to strong.  There is one more event next Sunday in this series.